Delivery of nucleic acids such as plasmid DNA or siRNA into cells is fundamental for biological research. There is a high demand for more efficient non-viral vectors due to their ease of use and safe handling. We have developed a facile modular method based on click chemistry for parallel synthesis of libraries of lipid-like molecules. Candidate molecules are selected by cell-based high throughput screenings and then undergo extensive optimization to generate specific transfection reagents. Over 300 chemicals have been synthesized and several of them showed highly efficient transfection in different cell types, surpassing the efficiency of several popular commercial transfection reagents. We have developed a range of multi purpose as well as more specialized transfection reagents, including ScreenFect®A, ScreenFect®siRNA and ScreenFect®mRNA and ScreenFect®65. More details about these reagents can be found in the Products page. 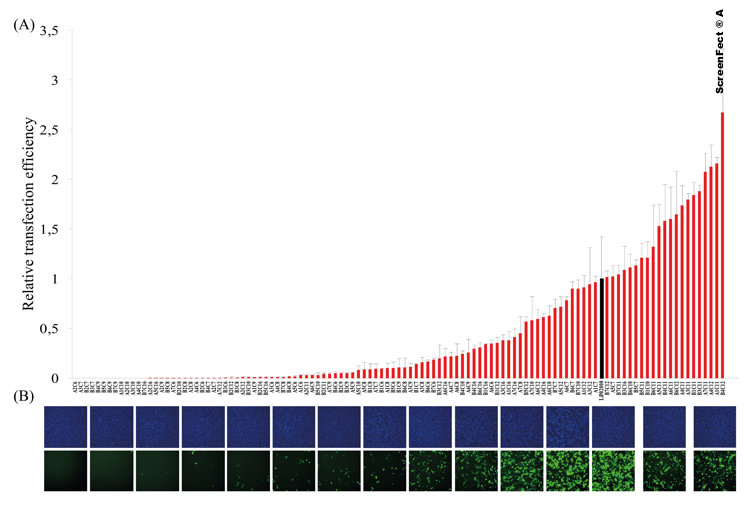 Comparison of transfection efficiency of ScreenFect®A with competitor reagents

HEK 293 cells transfected with GFP (lower panels) and cell nuclei stained with Hoechst (upper panels). Optimal condition suggested by manufacturer were used for all reagents and results presented above are from the same experiment, using the same cells. Of note, ScreenFect®A shows an optimal balance of transfection efficiency and cellular toxicity. Successfully transfected cells can be visualized due to the expression of the green fluorescent protein (GFP) and cytotoxicity is directly proportional to the number of brighly stained nuclei in the upper panels.

SDS-PAGE / Western Blot was used to visualise expression of a protein (LRP6 receptor) after its mRNA was targeted in
MEF cells upon lrp6 siRNA transfection. Dilution Buffer and OptiMem are negative controls without siRNA transfection and show "normal" LRP6 expression levels.